SOUTH NORFOLK, VA – This year, March arrived as less of a lion and more of an extension of February, with frequent freezing nights warming up to lovely lamb-like days.

Construction sites buzzed. New businesses opened. Civic groups planned community cleanups and an appreciation day for first responders. There was more vitality in the streets of South Norfolk than there has been in decades.

And then, everything stopped.

Virginia Governor Ralph Northam essentially closed the state March 23 with Executive Order 53, which ordered the closure of certain non-essential businesses, banned all gatherings of more than 10 people, and closed all K-12 schools for the remainder of the academic year.

Governor Northam also urged all Virginians to avoid non-essential travel outside the home, if and when possible.

Since then, meetings have been cancelled and there have been delays in the usual channels of communication.

The Commonwealth of Virginia is now in Phase II of reopening, and the activity on construction sites and on the streets seems to be increasing.

Note: Statistics are for the entire city of Chesapeake; not just South Norfolk.

To visit the webpage for the Second Precinct, CLICK HERE.

No demonstrations in South Norfolk

Despite the unrest related to current events that have plagued communities throughout the nation, there have been no protests or demonstrations in the borough of South Norfolk.

Due to the uncertainty of the pandemic and subsequent governmental orders, area leaders made some tough decisions in March regarding events usually planned for spring in South Norfolk.

The South Norfolk Fourth of July scholarship awards from the SNCL (one for $1,000, one for $2,000) and the Home Decorating Contest are still on, though the deadline to apply for the scholarship has passed.

To participate in the home decorating contest, decorate your home by 3 p.m. July 3.

Judges (who do not live in the area) will ride through South Norfolk and Portlock and choose First-, Second-, and Third-Place prizes, as well as one Honorable Mention. Winners will receive a gift basket with coupons from local vendors and other goodies, as well as a garden flag with stand to commemorate the award and show off to the neighbors.

Construction at ForKids’ new $22-million headquarters continues as pandemic restrictions ease and as weather permits. The building should be complete by March 2021.

Jennings’ office may come down soon

You’re going to see it sooner or later, so you might as well know: The dearly beloved office of Dr. Stanley Jennings, 1446 Chesapeake Ave., may be razed.

An orange placard that is taped to the garage door (with a similar notice on the front door) is signed by city building inspector Harold Phillips and marks the structures as unsafe, prohibiting habitation, occupancy or access. Because the building is dangerous, it is essentially condemned.

Directly below that notice is a Stop-Work Order, specifying that all work must stop as there are no permits for the property currently on file.

It is too soon to know what will happen to this property, but it looks like the writing is on the wall — or the doors, as the case may be.

Jennings was a local physician who co-founded what is now Chesapeake Regional Medical Center and birthed many of our native residents. He patched and stitched and cared for the people of South Norfolk and was a highly revered member of the community.  His office was the place everyone knew, the seat of medical care in South Norfolk, where so many have a story to tell about Dr. Jennings.

Jennings died in 2014 at his home in Portlock. Read more about him in this 2014 story from the Virginian-Pilot: CLICK HERE.

The parks in South Norfolk have reopened with Phase 2. The city advises adherence to these guidelines on its Parks, Tourism and Recreation page:

The property between 22nd and Poindexter Streets, where Overton’s Grocery once stood, has been leveled and construction has begun on a retail strip, anchored by a 9,000-square-foot “corporate flagship” Family Dollar and four smaller adjacent stores.

The project developer is the Overton Property Group, a real-estate firm based in North Carolina. The development is to include a 3-foot seat wall and a paved plaza with landscaping, to preserve the historic urban character of the downtown South Norfolk area.

Family Dollar is the only corporation that showed interested in this project. The other tenants in the development have not yet been determined by the developer, who has sole choice in which businesses fill the vacant units.

Family Dollar Stores are owned by Dollar General, which is headquartered in the Greenbrier area of Chesapeake.

It may be too early yet to worry about algae on the lake at Lakeside Park, but with the new aerator fountain and a cool spring, very little algae is showing on the lake at this time. The drainage areas at the east and west ends of the park are clear of litter and debris.

Just as we wrote that It’s finally warm enough for full-fledged porchin’ to commence in South Norfolk, temps fell into the 60s. In June. The 60s!

Despite the unseasonable chill, we recommend taking a drive- or walk- or bike-around and wave at your neighbors enjoying the cool afternoon air on their porches.

This is not something just for a pandemic quarantine. This is everyday life in South Norfolk in the spring.

This is the time for hydrangeas in South Norfolk, and you can ride and around and see them hiding everywhere. Watch for big blue and pink puffs of flowers, covering lush mounds of deep green foliage in the shady corners of your neighbors’ yards. And don’t forget to wave if anyone’s on the porch!

National Night Out has been rescheduled to October 6. Watch for details as the event gets closer.

For more information about the National Night Out campaign, CLICK HERE.

The South Norfolk Neighborhood Watch is a partner in this event. For more information, contact Greg Gonzales, president, via the watch’s Facebook page.

We checked in with Raymond and Emma Harper, and both seem to be doing well in spite of the pandemic, the quarantine and the stay at home orders.  We exchanged some books and looked in on the Roma tomatoes we planted in the Harper’s backyard in March.

Raymond is South Norfolk’s most prolific historian, writing 12 books and countless newspaper columns on the history of our area.  He is 92 years young.

Several organizations are giving away free food from food banks, farmers’ markets and community gardens. For school aged children, contact the Buffalow Family & Friends Community Days. Or, for everyone else, contact Healthy Chesapeake if you need help with food. 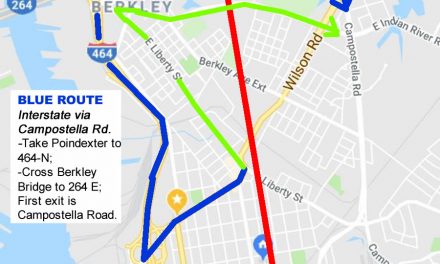 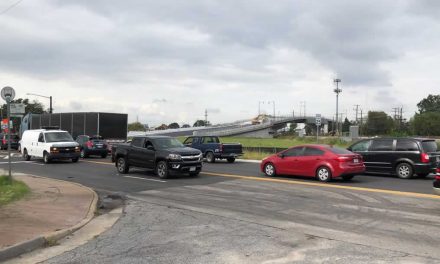 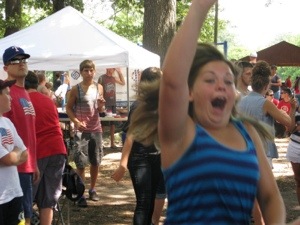